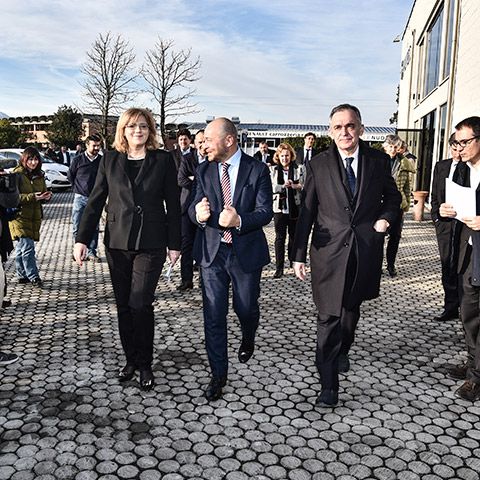 On Friday, February 8, 2019 Futura received a visit from the governor of the Tuscany region Enrico Rossi together with Corina Cretu, European Commissioner for regional policies. They were joined by the mayor of Capannori and president of the Province, Luca Menesini.

They were welcomed by Faper Group President Fabio Boschi and the CEO of Futura Piero Ceccon who presented the company and hosted a visit inside “Cittadella Futura”, offering the delegation an overview of the manufacturing facilities and its special features.

Futura was one of the companies selected by the European Community to benefit from funding for the development of new technologies for the paper industry, with the projects “Slat Cat” and “Iride”.

President Rossi said: “Futura is an example of those intelligent and dynamic enterprises in which we have decided to invest European funds rather than spread contributions indiscriminately: it is a choice that has paid off and has led to further development”.